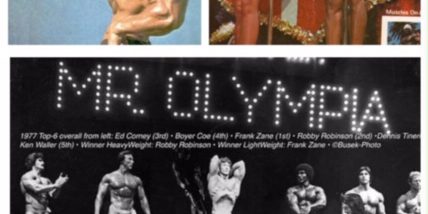 Bodybuilding Writer Jerry Brainum joins the Bodybuilding Legends Podcast to review the year 1977 in Bodybuilding with John Hansen. In Part One of the interview, Jerry and John talk about the movie “Pumping Iron”, which was released in January, 1977 and the impact it had in introducing bodybuilding to the general public. Jerry and John also talk about the release of Arnold’s first book, Education of a Bodybuilder, as well as the 1977 Mr. Olympia contest with Frank Zane and Robby Robinson and why Lou Ferrigno was not in the contest. Finally, they discuss the big 1977 AAU Mr. America contest which featured a parade that took place before the contest. At the end of the podcast, John Hansen reads an article from the May, 1977 issue of Muscle Builder Magazine entitled “The Smallest Trophy He Ever Won” written by Janet Charlton about when Arnold Schwarzenegger won the Golden Globe Award for Best Acting Debut – Male at the 1977 Golden Globes.