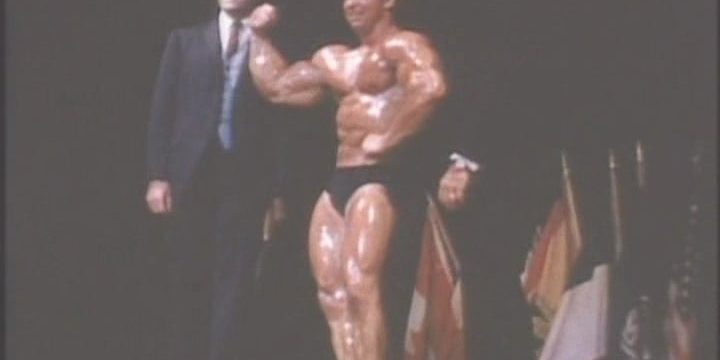 The Mr. Olympia contest is universally known as the biggest and best bodybuilding contest in the world. The winner of this prestigious event is regarded as the best bodybuilder alive. Bodybuilding legends such as Arnold Schwarzenegger, Frank Zane, Lee Haney, Sergio Oliva, Ronnie Coleman, Jay Cutler and Phil Heath are all multiple Mr. Olympia winners.
The Mr. Olympia contest was originally created by magazine publisher Joe Weider. Joe was a huge fan of the sport of bodybuilding and it was frustrating to him to see such great bodybuilders like Steve Reeves, John Grimek and Reg Park have no where else to go after they won prestigious titles like the Mr. America and Mr. Universe. Weider wanted to create another competition for only the best bodybuilders in the world. Only world champions like the Mr. Universe or Mr. World winners would be invited to compete in this new contest.

Joe decided to call his new contest the Mr. Olympia. Rumor has it that Joe was out drinking beers with top bodybuilder Larry Scott one night and he was relating his frustration about the early retirement of champions like Reeves at such a young age. How good would bodybuilders like this become if they had a bigger contest to strive for?

Larry listened to Joe’s predicament and asked Joe what he would call this biggest contest in the world. Joe looked at the beer that Larry was drinking and noticed that the label said Olympia Beer. At that moment, Joe proclaimed the new contest would be called the Mr. Olympia contest. He also thought the title sounded a lot like the mythical Mount Olympus, where all the Gods are born. 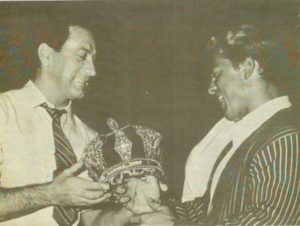 The first Mr. Olympia contest took place on September 18th, 1965 at the Brooklyn Academy of Music in Brooklyn, New York. Along with the inaugural Mr. Olympia event that year, the IFBB also decided to hold the Mr. America and Mr. Universe competitions as well.

Joe promoted the first Mr. Olympia contest heavily in his magazine Muscle Builder/Power, promising the bodybuilding fans that the best bodybuilders in the world would be onstage that night vying to be the first winner of this historic event. Weider had invited such bodybuilding dignitaries as John Grimek (Mr. America 1940-41), Steve Reeves (1947 Mr. America and 1950 Mr. Universe) and Reg Park (3x NABBA Mr. Universe) to compete in the very first Mr. Olympia.

On that September night in 1965, bodybuilding fans packed into the Brooklyn Academy of Music to see this star studded event. Many of the young fans in attendance were anxious to see the bodybuilding stars from the West Coast that they had read about in Muscle Builder magazine. Dave Draper, the Blonde Bomber, was over six feet tall with a massive physique and bleached blonde hair. Dave looked just at home on the beach carrying a surf board with a pretty bikini girl on his arm as he did blasting his muscles at Gold’s Gym in Venice, California. 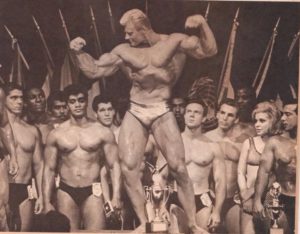 Another star that the fans were excited to see was Larry Scott. Larry, like Dave, was featured every month in Muscle Builder enjoying life to the fullest. Every issue of the magazine would show Larry on the beach, smiling that perfect smile and flexing his massive arms to the delight of a number of gorgeous girls who were happy to just be in the presence of this Muscle God.

In addition to the first Mr. Olympia contest, the IFBB Mr. America and Mr. Universe would also be held at the Brooklyn Academy of Music that night. The Mr. America introduced the popular Dave Draper to the east coast fans. Wearing blue metallic posing trunks, Big Dave stepped onstage with his huge physique. Draper excited the crowd with his big arms and his massive back. The bodybuilding fans were in a frenzy by the time Dave was finished with his posing routine.

In a close decision, Dave Draper beat out a ruggedly developed Chet Yorton for the Mr. America title. Yorton had superior leg development but Draper was the new Golden Boy of Bodybuilding, a muscular blond giant who would be courted by Hollywood and have a starring role in the movie “Don’t Make Waves” (1967) with Tony Curtis and actress Sharon Tate. The sold out crowd loudly cheered the decision.

In the short class, the muscular and diamond hard physique of Rick Wayne from London, England defeated the massive Rock Stonewall from Chicago. Rick was one of the best amateur bodybuilders in the world and his incredible arms and ripped abs delighted the hardcore bodybuilding fans. Rick would eventually emerge as one of the best writers in the bodybuilding world years later when he started working for Joe Weider’s Muscle Builder magazine.

The medium class was won by a future Mr. Olympia winner, Frank Zane. Frank, only 23 years old that year, displayed the symmetrical and perfectly proportioned physique that would eventually go on to be the best bodybuilder in the world. At this competition, Zane was not as defined as he would be in the coming decade. He was a diamond in the rough but anyone with an eye for bodybuilding could see that Frank Zane was a future champion.

The tall class winner was Earl Maynard, like the Short Class winner Rick Wayne, also from England. Earl displayed great muscularity and wide shoulders to dominate the tall class. For the overall decision, Rick Wayne had the mass and definition but the judges decided to go for the big man, Earl Maynard, for the title of 1965 IFBB Mr. Universe. 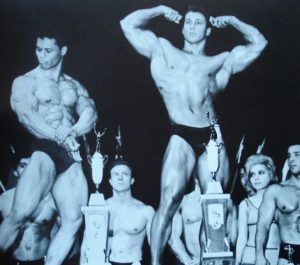 After a short intermission, the audience was ready to see what they came for. The first ever Mr. Olympia was about to take place. To the fans disappointment, Reeves and Park were not in attendance. In fact, the “Biggest Bodybuilding Contest in the World” only featured a mere three competitors.

Earl Maynard, fresh off his Mr. Universe win that night, was the first competitor to pose. Although Earl certainly had a world class physique, he was no match for the next two competitors that followed him onstage.
A young Harold Poole stepped onstage next. A fellow New Yorker, the bodybuilding fans cheered loudly for Poole. At only 21 years old, Harold had one of the most massive physiques in bodybuilding. His classic most muscular pose, in which his massive traps seemed to swallow his head and neck, brought crazy applause from the hardcore fans. After years of disappointment competing in the AAU Mr. America contest, Harold decided to try his luck with the IFBB. It was a good decision as Harold quickly became one of the rising superstars in the IFBB. As Harold finished his posing routine with his incredible most muscular pose (“The Crab”), Poole exited the stage to the biggest ovation of the night so far.

What was to happen next could not be predicted. It would be a moment in bodybuilding history that would be recounted in later years as a mythical occurrence, an experience that you had to witness in person to feel the awe-inspiring power of magic happening. 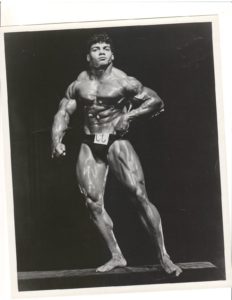 Bud Parker, the emcee of the evening, dressed in the finest tuxedo available in Brooklyn, announced to the sold out crowd, “From Studio City, California…….”. This was it! The crowd erupted in a furious roar as they waited for their golden haired Bodybuilding God to take the stage. As the sound of the audience increased in volume, an amused Larry Scott stood just off the stage, shielded in the shadows only inches away from the spotlight.

As Parker tried to announce Scott’s name to the screaming fans, the man in question waited for his moment, smiling to himself at the tremendous applause. After several minutes of sustained screaming from the crowd, Larry slowly stepped one foot forward and began walking toward the center of the stage. As he entered the spotlight, the rabid fans stood up and screamed as they finally saw the man in person.
Scott stood at the center of the stage with the spotlight bathing his magnificent physique in all it’s splendid glory. His hair was platinum blond and as he smiled to the audience, his teeth were perfect and white. He was more than just a bodybuilder, he was a movie star, he was a matinee idol, he was the greatest bodybuilder in the world! Looking off into a corner of the Brooklyn Academy, Scott raised the most magnificent arms on the planet and flexed his incredible biceps as he looked directly into the crowd and smiled that movie star smile. 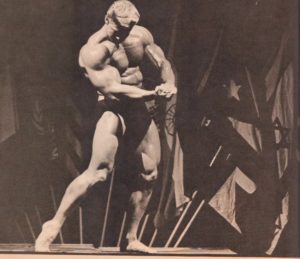 The theater erupted into bedlam! Every person in the auditorium stood up and screamed like out of control teenagers at a Beatles concert. The magnificent Scott played with the crowd like a skilled conductor leading an orchestra, perfectly sliding from one jaw-dropping pose to another. Pivoting to his side, Larry cocked his right arm by his hip and extended his other arm in front of him. The football sized bicep seemed to jump off his arm as he flexed the most famous arms on the planet for the most muscle crazy fans in Brooklyn.

Larry stayed onstage displaying one perfect pose after another, mostly emphasizing those magnificent arms and deltoids. The insane roar from the crowd never dissipated from Bud Parker’s undressed introduction until Larry finally waved to the crowd and stepped off stage. Twenty minutes of sustained and unadulterated craziness from a knowledgable crowd of muscle hungry fans who knew they had just seen the greatest physique in the world! 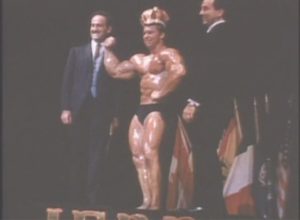 When Scott, Poole and Maynard were brought back onstage for the final announcement, it was inevitable who would be crowned the first Mr. Olympia winner. Earl Maynard was solidly in third place with a smiling but disappointed Harold Poole in second. The New York fans wildly cheered the proclamation that Larry Scott was the first Mr. Olympia. Both Joe and Ben Weider stepped onstage to congratulate Larry on this historic win.

Although the winner of the inaugural Mr. Olympia was promised a $1000 first place prize money, the Weiders decided instead to award Larry Scott with an oversized red crown. Larry beamed with joy as Joe Weider placed the crown on Larry’s head and the three of them posed for the camera of photographer Jimmy Caruso. The Mr. Olympia contest was now official with the first event taking place in 1965. Not many could have predicted at this point how big the contest would eventually be and the world of bodybuilding would never be the same again. 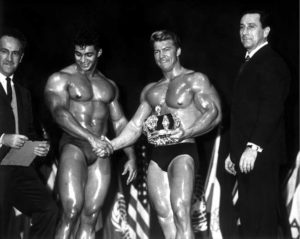