The 10th Mr. Olympia contest was somewhat of a milestone in the history of bodybuilding’s biggest competition due to the emerging media attention it began to attract. In 1974, President Nixon was forced to resign in wake of the Watergate scandal, Hank Aaron beat the beloved Babe Ruth’s home run record, frustrated motorists waited hours in line to fill up their cars and streaking was in. The idea of muscles on a man’s body seemed as ridiculous a notion as not being allowed to smoke in a restaurant.
Despite the rampant prejudices imparted toward the strange and misunderstood community of bodybuilders on the part of the general public, the magazine Sports Illustrated was intrigued enough about this weird sub-culture to send out one of their ace writers to cover the subject for a substantial ten-page article in their October 14th, 1974 issue. The misaligned “sport” of Bodybuilding would be treated with both curiosity and respect by assigned reporter Richard W. Johnston as he investigated the growing popularity of this cult-like activity. 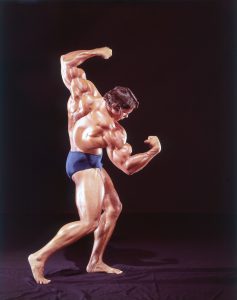 The timing of the number one sports magazine couldn’t have been better. Arnold Schwarzenegger, the reigning Mr. Olympia, was about to defend his title for the fifth time that very weekend in New York City at the prestigious Felt Forum in Madison Square Garden. At the peak of his career and with his eye set on soon conquering the world, Schwarzenegger so impressed the reporter from Sports Illustrated that he received the distinction of being labeled “the most extraordinary athlete anywhere today as well as the most perfectly developed male in history.” 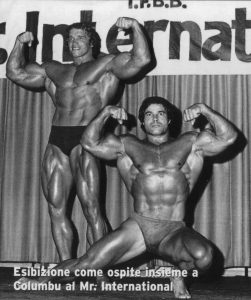 Johnston attended the 1974 Mr. International contest, held at the Embassy Auditorium in Los Angeles, during the summer that year to get a feel for what bodybuilding was all about. The event, promoted by both Schwarzenegger and his best friend Franco Columbu, allowed the veteran reporter to experience a bodybuilding competition in person. It also gave him the rare opportunity to see the King of the sport do his thing on the posing platform. After witnessing Arnold’s performance onstage, he eloquently described it as “an athletic and artistic display that communicates as much emotion as a Bobby Thompson home run or a Joe Namath bomb thrown 60 arching yards 10 seconds before the final gun.”
The 1974 Mr. Olympia was also attended by writer Charles Gaines and photographer George Butler. Their soon to be published book, Pumping Iron, released one month after that year’s Mr. Olympia contest, would bring the sport of bodybuilding out from the dark and musty shadows and into the limelight where both the media and the public would soon look upon this strange sub-culture with a mixed reaction of curiosity and awe.
The not quite sold out crowd of the 4,500 seat Felt Forum would witness bodybuilding history as a perfectly sculpted Schwarzenegger would defeat his new challenger, 22 year old Louis Ferrigno, by easily cruising to his fifth Mr. Olympia victory. Ferrigno, already a two time Mr. Universe winner, was touted as the sport’s “next big thing” in recent issues of Joe Weider’s Muscle Builder/Power magazine. At 6’5” and weighing 260 pounds, Big Louie was expected to give Schwarzenegger the challenge previously presented by former champ Sergio Oliva. 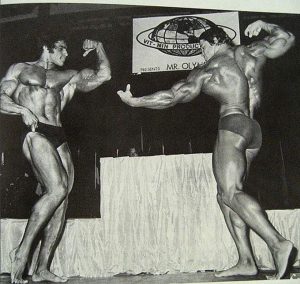 Unfortunately, Lou had over dieted for the 1974 Mr. Olympia and did not present the dominating mass demonstrated by the confident Schwarzenegger. One look at Arnold’s incredible 237 pounds of superbly constructed perfection backstage and the inexperienced Ferrigno knew it was over. As the competitors walked onto the smoothly carpeted stage at the Felt Forum, Schwarzenegger connected with the screaming fans and admiring judges to put as much distance between him and his competition as a Hank Aaron home run. 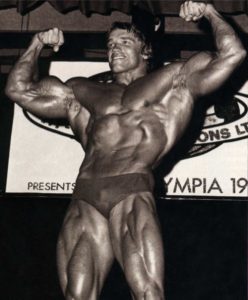 For the first time ever in 1974, the Mr. Olympia contest was divided up into two classes. The Under 200 Pound class was a trade off between Arnold’s best friend and training partner Franco Columbu and the symmetrically sculpted Frank Zane. In a battle between two diametrically opposed body types, the shorter and more massive Columbu defeated a disappointed Zane. 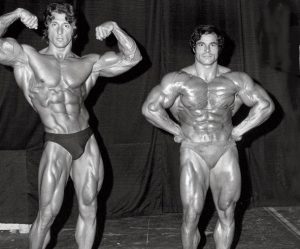 As expected, the Over 200 Pound class was awarded to the inevitable champion Schwarzenegger who acted like there could be no other outcome. After years of domination in the bodybuilding world, Arnold had defeated all the top champions of the sport several times over. With five Mr. Universe titles and five Mr. Olympia victories, this was to be his final time onstage and he wanted to end his illustrious career with a bang by competing in his best condition ever. 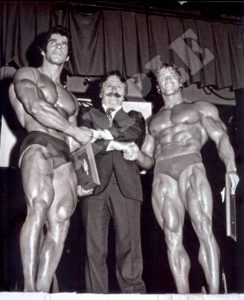 As Arnold and Franco exited the backstage doors of the Felt Forum at Madison Square Garden, they were met by a massive crowd of rabid bodybuilding fans who chanted Schwarzenegger’s name as the two champs walked down the streets of New York. Onlookers must have asked themselves what was going on and why there was so much commotion surrounding these two heavily muscled men dressed in track suits and carrying gym bags. The fitness revolution was about to begin but only the small cult following of bodybuilding fans could see it coming. It wouldn’t be long before men all over the world would regard their reflection in the mirror with a more discerning eye towards their pecs and abs. But in 1974, thanks to the open minded editors of Sports Illustrated and the magnetic star power of Arnold Schwarzenegger, the sport was like a great restaurant that no one knew about, a delightful secret shared only by those in the know. Bodybuilding was too magical and special to keep hidden for very long. A change was coming! 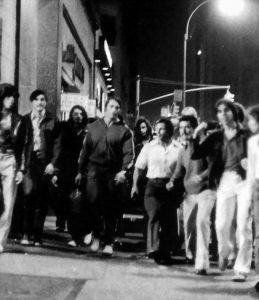